In Australia today, there are over 2,000 people living with Motor Neurone Disease. Every day, 2 Australians are diagnosed with it too.

The 21st of June is Global MND Awareness day. This is a day MND/ALS Associations across the world raise awareness of the disease to the general public. It is a day also used to express hope that one day there will be a turning point in the search for a cause and treatment.

This year, we wanted to share the story of Ger and his journey through diagnosis to today. 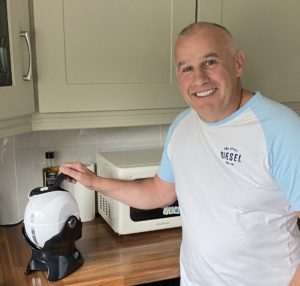 Ger is and active family man. Ever since he could remember he has been out playing soccer with the lads, going fishing with his Dad or lifting weights at the gym.  ”I have always had a love for the gym, I was well built and I lifted very heavy weights.”

Growing up he was very close to both of his parents and had tried to have a similar relationship with his own 3 children. He loves to have the family round, regardless of whether its immediate for extended and he is recently a happily engaged man to the lovely Laura.

It was in October 2020 when Ger received his diagnosis of MND. Ger has always loved to go to the gym to lift his weights but in the last 3 years leasing to his diagnosis, he had noticed a loss in strength and size in his arms and chest. ”I didn’t overthink it at the time, I just it down to getting older.”

It wasn’t until 2019 that Ger noticed the change in his breathing. ”I would be out of breath for the smallest thing, I also noticed little changes in my hands. I thought it was just arthritis as there is a history of it in my family.”

It was the little things he started to find difficult. ‘‘They didn’t do what you wanted them to do. That pinching movement – tying to zip up a jacket, tie your shoe. Buttons where a nightmare and putting the key in the door. Your hands just don’t want to do what your head is telling them.”

Ger spoke to his doctor as a routine checkup and happened to remember to ask about his breathing and his hands. ”When she examined me, she noticed my hands twitching as well and became concerned.”

His doctor sent him to the hospital the following week for tests which included an MRI and a nerve conduction test. It was on his 3rd day at the hospital that he told to bring Laura in with him. ”I was sitting in the waiting room with my head in my hands, it’s not good. When you have to have someone with you, it’s not good.”

When they went into the doctors room, Ger was told he has Motor Neurone Disease, that it was terminal and that there was nothing they could do. There is no cure.

”I was numb, totally numb”

Devasted by the news, they had just gotten engaged in the summer and have great big plans for the future. ”I asked what do I do? Do I go into work?”.  The doctor said that Ger won’t be able to work, to come out of it, he has worked enough for 40 years.

”I was devastated, to be honest with you. You start to wonder what you did wrong. You know, I didn’t smoke, I minded my body. It was the end of the world at that stage for me.”

”You can’t not be negative when you are hit with such a surprise. It’s a devastating illness. In my opinion it’s probably one of the worst things out there that you can be left with.”

Ger was then referred to a specialist  and ”she changed my way of thinking. She advised me that life wasn’t over and all my plans and life should go ahead as normal and try to live as normal as possible. No two people are the same with this.”

Those living with MND can experience a combination of both upper and lower motor neurone degeneration. ”You could see someone tomorrow who can’t talk or swallow. Other people can do that fine but they have no use of their limbs and then others have the whole lot of it. For me, it’s breathing, if I do anything at all, the breathing is very hard on me and the hand movements, I can’t do anything with the hands. It’s progressing but not at a fast pace.”

Ger was told that with some types of MND, it it starts off slowly, it will generally continue slow. However, if it starts off fast, it will progress fast. ”I got my diagnosis in Oct 2020 and one person I know received their in December. They can’t talk and can only shuffle across the floor.”

”Am I lucky? Probably not, I won’t go that far but I am not in a bad place at the minute.”

Gerard credits the specialist for helping him to change his outlook. ”I could either sit down and wait for this to happen and I think if you do it will happen quicker to you. Meet it head on and fight it. There’s not a whole lot I can do to fight it but I can keep g 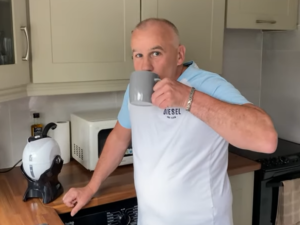 oing. I don’t stop and I’m going to keep going as long as I can.”

Sadly, there is no cure or treatment for Motor Neurone Disease. ”There is a tablet they give that can slow things down but it’s not much good because MND is different for everyone and it’s 1 tablet for everyone.”

Ger was given a ventilator for the night and it breaths with you, not for you. ”It’s hard to get used to but it’s good when you do. It I didn’t use it at night, I would be tired” – ”Tiredness with MND is a big thing. I could work all night and then go out for the day, but those days are gone!”

The future for Ger is to look ahead with a more positive outlook. Laura and Ger have a few new home renovations to look after and a wedding to plan. While there may not be a cure for MND just yet, he is confident that they will find one in the future. ”They are the most amazing group of people I have ever met. The nurses in the hospital come to me and this is all from funding.”

Popping the Kettle On:

In order to help make his life that little bit easier at home in the kitchen and safer, Uccello Designs sent Ger his very own Uccello Kettle. He was extremally impressed with it and how easy it is to use. See for yourself in the video below.